Home Reviews Tom Teasley: ‘All The World’s A Stage’
Reviews 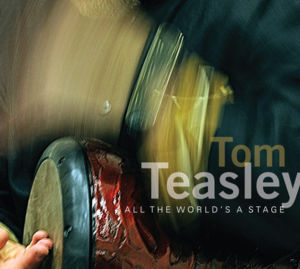 Brilliant. That’s the short of it. Tom Teasley’s “All The World’s A Stage” is such a uniquely and expertly crafted set of percussive movements that calling it anything else simply wouldn’t be accurate. Yes, it’s thick. No, it’s not for the casual music fan. The stuff demands intensive work from the listener to accept, let alone grasp. In a popular music lexicon overly dependent on simplicity and surface, there’s a criminal lack of room for something this textured, this inventive, this … good.

But that’s precisely what makes the nine-song set so impressive: It takes guts to dive into West African rhythms and Middle-Eastern influences as a practice, let alone as something a single artist could master. Teasley proves his expertise over and over and over without regard for listeners who enjoy internalizing the sounds they hear with a side of easy. Each track is devoid of words. Each song makes use of instruments you can’t actually pronounce. And the explorative time signatures that switch with an unfair amount of ease will leave even the jazziest of jazz fans wondering why their head won’t stop spinning.

Cynics might call it all too pretentious to ponder, but those who do are lazy. The mere notion that all of the music presented is performed by a single individual is a revelation in education. Take “Fuska And Varuna.” In a matter of nearly 4 1/2 minutes, you hear the following instruments: A Korg Wavedrum. A Malley Kat. Cajon. Bass Melodica, as well as a Sporano Melodica. A type of vocal percussion labeled Kannakol. And, of course, cymbals. It all amounts to a moody soundtrack for traveling busy desert cities at night, when God knows what you might find down a dirty alley. Transportation rarely sounds this tangible.

Opener “Oresteia Furies Dance” figures to be the most accessible of the bunch as Teasley gets intricate with his Balafon, an African xylophone that runs here as though a tiger is chasing it through the rain-forest. The lightning-quick rudimentary action is impressive for anyone who may have moonlighted as a drummer at one point in their lives. The rolls are just so clean and so acute that you have to wonder how he pulls it off in the flesh. Plus, the added vocal percussion draws directly from Paul Simon’s “Graceland” or, better yet, Ladysmith Black Mambazo, in such a way that can be described as only sublime.

Teasley likes to describe himself as a jazz artist first, though, and that influence can be found on “Rumba For Rama,” “Nights Over Baghdad” and “Rise Up” for varying reasons. The latter brings to light intriguing cymbal patterns that rival those of legend Joe Morello, with whom the D.C.-area artist has studied. The tones constantly redefine themselves underneath Middle-Eastern melodies that do all they can do overshadow the unavoidable Sabian work Teasley accomplishes. Conversely, “Baghdad” centers around what sounds like a marching snare drum fueling some type of high school football game’s half-time show. Accentuating the pace is some solid, addicting melodica work that embeds itself deep within the fabric of the finished product.

Even slowing everything down serves the set well. “Orestes’ Lament” could almost double as an experimental take on mid-1980s progressive rock that would make Stewart Copeland salivate. “Setzuan Blues,” the collection’s tiny swan song, is Arabic to the core, though a perfect way to sum it all up. At three instruments, the track is not only the album’s shortest, but it also uses the least amount of toys any song gets. It’s a simple and smart way to close up shop, somewhat of a snarky admission of conclusion that justifies the brains behind all the brawn this record bleeds.

Then again, “All The World’s A Stage” doesn’t really need an act of vindication to prove its place among some of the best music the D.C. metropolitan area has seen. Not for the faint of heart, it’s a whirlwind of sounds, experiments, successes and imagination. To hear what this guy can accomplish through these very specific and very foreign instruments is like watching a poet laureate recite his best book of work to a crowd eager to absorb perspective, eager to absorb art.

Tom Teasley is an artist, all right. And a darn good one at that.

For The Record Podcast Episode 6 – The Artomatic Crew