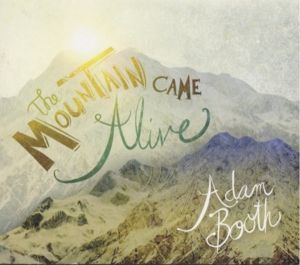 In 2013, Adam Booth won Storytelling World Award honors. In 2012, his “The Mingo Black” CD was juried into a Best of West Virginia competition. In 2011, 2006 and 2004, he was a winner in the West Virginia State Liars contest. In 2010, the accolades came from Fredericksburg, Va., and in 2006 he took home a prize from the Northeast Storytelling Festival Liars Contest. And because all of this information comes directly from his website, it’s gotta be true, right? Right.

So now that we’ve established what Booth can do, let’s establish what he can’t do: sing. And when you put out a 20-track record chronicling the year of a mountain with help from the spoken word — as well as that pesky musical medium he loves to utilize a little too much — that’s about as big a problem as the giant structures the guy seems to be so passionate about.

“The Mountain Came Alive” is designed for children and that forgives a lot of stuff here. Reading through the album’s liner notes and poking around online reading materials, you’ll find that Booth has a very real problem with strip mining, and a very real passion for preserving every inch of Appalachia. He should be admired for that, of course — “Get to ‘em young and cultivate coal mining change!” seems to be the rallying cry — but despite his good intentions and affable demeanor, music might not his best Art of Choice through which he can spread his message.

The best moments come, somewhat sadly, when Booth fades into the musical fabric. Two of the three hymns feature actual choruses — one, the Frederick Chorale and the other, the Northern Shenandoah Valley Shape Note Singers. The former is beautiful as its breadth and warmth create a tangible sense of comfort within the speakers while the latter is slightly more powerful though no less memorable and features layered a cappella vocal harmonies that paint a vibrant, if not inspiring, portrait of religion.

But then that third hymn happens.

“Hymn III: Spirit” strips it down to just Booth and his piano, and … whoa, there. Embarrassingly flat, his capable skills on the keys are completely overshadowed by his cringe-worthy singing voice. At a sparse 1:47, it doesn’t last long, but it serves as a warning for whatever solo spots lie ahead. And yes. There are more solo spots that lie ahead.

It’s a shame, really, because there’s some nominally interesting stuff going on otherwise. “Old Mountain Folk Dance” calls on a flatfoot niche and works well with its boppy piano setting the tone. “Cargo Train” is a wee bit cheesy, but the students who appear on behalf of the Morgan Academy in Shepherdstown, W.Va., bring an energy that can’t be replicated without sincerity or enthusiasm. The more willing the project’s leader is to stay out of the spotlight, the better the end product is.

Yet lest we be reminded: Booth is the project’s leader.

“Where Will They Go?” should almost receive points for its nerve, considering how it features nothing more than the guy’s voice. “Dream Song” is pretty piano and frumpy drums all played good enough by the singer, who still … well … sings. And “Mother Milkweed” has a neat dulcimer arrangement and an even more imaginative appearance from a toy piano, but there’s no escaping that weak, apathetically pitched voice.

Most of the rest is simple recital of whatever award-winning story Booth is telling backed by occasional odd sounds and some fairly pedestrian musicianship (respect for the autoharp; not so much for the acoustic guitar work). At the end of the day, it all feels like one, big morning-time PBS program, and because that’s probably what he wanted anyway, a certain amount of success should be rewarded to “The Mountain Came Alive.”

But even with that said, if storytelling is what Adam Booth is good at, this set proves he should probably just stick to the book whenever he decides to head back into a recording studio. Because if a mountain wasn’t even enough to move that voice toward the better side of bad, it’s hard to think there’s anything out there, roaming the back roads of Appalachia, that might kick it into gear.