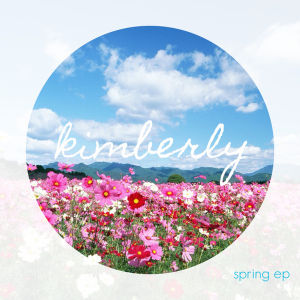 “Kimberly’s first recording and first songs. The songs were written and recorded in just 2 months. Recorded and mixed in Brandons apartment. Listen loud!!”

… And that’s pretty much all there is on the Internet about local dance-pop trio Kimberly. For those wondering, you can find it, along with the songs in question, on their Bandcamp page (a Facebook profile exists, too, but outside of a few pleasantries, the thing is as sparse as Wal-Mart’s turkey freezer around Thanksgiving). And, save for an errant lack of an apostrophe, that’s about as perfect a description of their “Spring” EP as there is: short, to the point, excited and meant to be listened loud!!

No, but really — this is some pretty good stuff. An offshoot of local standouts Holy Mtn., Kimberly features all the great attributes of its sister act (sad, understated vocals; a knack for groove) and virtually none of its faults (an identity crisis; some weird attraction to rock music). You couldn’t find a more promising trip back to 1987 if you hopped in a DeLorean and set your VCR to record “Remote Control” while lighting up your stove to cook some Jiffy Pop.

Yet while the collection works on a purely nostalgic trip, it also has many modern-day elements in which any listener should have no trouble finding value. Samuel Tressler IV’s voice fits this kind of synthed-out set perfectly, his rainy-day mood acting as the project’s most imperative instrument in its own right. His smooth intonations breathe over top a slew of gloomy-gus chord progressions like Morrissey at a vegetarian convention. It’d be laughable if it all weren’t so fabulously true.

“Roses,” possibly the set’s most well-rounded moment, builds and builds, builds and builds before a spotty (and at times shaky) keyboard floats through a bright hook as accessible as anything you’ll hear on Top 40 radio today. Ironically, the track’s most retro ingredient proves to be an electric guitar solo that suggests these guys are more Prince than Pet Shop Boys. It’s a brave move for an outfit clearly prideful in its minimalism.

Even better is lead track “December’s Air,” a full-on leap into a universe cluttered with fluorescent colors and big, tall, curly hair. The song’s most intricate and intelligent touch? Opting for the live drums to double up their electronic counterparts around the halfway point. In a music climate so eager to celebrate processed sounds, rarely do we see post-indie buzz acts incorporate both forms of percussion within their take on pop-electronica. Add in an utterly kitschy (read: fantastic) keyboard synth melody and what you have is the best throwback track local music has seen all year.

Need more? Try “All My Love” and “Lonely” on for size and see how surprisingly comfortable those worn-out spandex feel all these years later. The former is a moody ballad-like diatribe that features Tressler at his most emotional as he pouts, “I’m waiting for you.” It works because of its honest presentation and urgent feel. The latter, meanwhile, provides an upbeat bow for the collection, tying the set together by bringing forth all the elements on which these guys lean (that electric guitar, accessible synth runs, etc.) and combining them for a message that far supersedes the lack of production that runs a through-line between tracks, serving as the EP’s Achilles heel.

That message? Kimberly has some serious potential. If the quick bio on their Bandcamp page reveals anything, it’s how primitive and rushed this set was while being cobbled together, and for that alone, these three guys should be revered, not ridiculed. Sometimes life, budgets and time can be the lone suspect when deciphering the difference between good and great; not a lack of talent. “Spring” makes a hell of a case for exploring the road between those two labels.